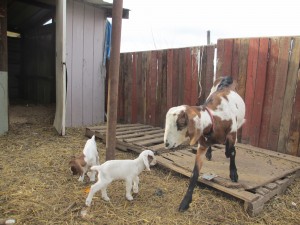 The animal kingdom is sometimes harsh but pragmatic.  When our pregnant doe, Mocha, had triplets, I was so excited.  Not only was this our first set of triplets, but all the kids were girls. Shortly after the birth, I realized that Mocha did not seem to have the desire or capacity to nurse all three kids.  In fact, in the first few hours after giving birth, she was only nursing the strongest kid.  I had to hold up the two weaker kids to help them nurse. After doing this for an hour, I left for the night.

The next morning, I was relieved to see that two kids were nursing independently.  The smallest kid, however, was lying lethargically on the ground. She was too weak to nurse and Mocha did not seem to be concerned.  It looked like the only option now was to bottle feed. I warmed up some goat’s milk and began to feed the struggling kid milk using a syringe.  During the next four hours, I took her with me in the truck with the heater on full blast, feeding her every thirty minutes.  She seemed to be swallowing and doing better, even crying a little bit. I thought she had turned the corner and was going to survive, but towards noon, the kid passed away.

I’ve seen a lot of death on the farm, but this was particularly hard because I was hopeful that through my intervention, the little kid would survive. It seems like Mocha knew she had to sacrifice one to save the two. Animals can quickly make decisions that we humans would agonize over.

Today, Cappuccino and Frappuccino are six days old and thriving.