I buy local (Fishing in Zambia)

When I was in college I went to farmer’s markets and shopped in grocery stores that sourced local organic kale and grass-fed beef. The Brussels sprouts grown in Salinas were more expensive than the ones shipped up from Chile, but I didn’t mind. I supplemented my academic curriculum with a steady diet of Michael Pollan, fought off hordes of foodies at Off The Grid Thursdays for pricey food truck fare, and rubbed elbows with the Berkeley landed elite at Chez Panisse, the birthplace of the slow food movement. My food was slower than a glacier.

However, here in rural Zambia, buying local isn’t a deliberate choice made by a burgeoning environmental steward. It’s an economic and logistical default. Vehicles are uncommon and everybody grows or makes something, so the scope of what it means to buy local narrows considerably: when I want some tomatoes, I stroll along the tarmac until I spot a tray of them perched atop an overturned bucket on the side of the road. I hand a small bronze 50-ngwee coin (the equivalent of ten cents) to a small girl sitting in the grass or a bamayo hurrying out of the nearest hut, she gives me two medium-sized tomatoes, and I am on my way.

Depending on the season, on any given day I can find a plethora of offerings sitting by the side of the road within a 10-minute bike ride from my house: tomatoes, fried fish, cisense (tiny dried fish), bananas, tangerines, groundnuts, sweet potatoes, dried cassava, sugar cane, beans, eggs, fritters (lumps of fried dough), buns (small baked rolls), guavas, jackfruit, and another big green fruit the name of which I haven’t yet committed to memory and which I’m told doesn’t taste great anyway.

Occasionally I can find onions and huge avocados, a treat because it saves me the 20-kilometer ride to the big market in Kashikishi. If I head a few kilometers south on Saturdays, I can get cabbage at Shabo Market. And from time to time, one of my neighbors even sells, I kid you not, deep-fried waffles.

I can even get some groceries without leaving my front porch. The fish seller pedals slowly along the path by my hut in the early afternoon, advertising his wares with a shout repeated at ten-second intervals. His fish are piled upon each other in a basket tied to the back of his bicycle and smell about how you’d expect them to smell after they’ve been marinating in the sun all day. I politely pass on theisabi.

When the meat sellers are spotted walking a bicycle with two blood-stained buckets strapped to the back slowly through the village, word spreads and the bamayos assemble swiftly. They lift up goat legs and pig’s heads (with hooves and snouts still attached) for inspection and haggle with the men over prices in rapid-fire Bemba as I watch with a mixture of interest and apprehension. Sales are jotted down in a worn notebook so that the money can be collected later. The chance that these dismembered animals have been kept refrigerated and covered is about as high as the chance I’m going to risk spilling my intestines into my chimbusu the following morning after eating questionable meat. So I tell people that I’m a vegetarian and pass on the hairy slabs of goat, too.

Meat is kind of a big deal. Although each of Nshinda’s 7,638 chickens and goats have free reign to poop in my front yard, sleep in my latrine, and wake me up at 4:13am, precious few of them actually end up getting eaten. They’re more like status symbols and walking, squawking (loudly) banks. When a family needs the kwacha they’ll sell the animal, usually taking it to the boma (though I did just bike past a baby goat trussed up and lying by the side of the road yesterday afternoon).

But when I hear the lilting melody of “Umusalu!” and spot a basket of leafy greens bobbing along the path in front of my hut with a tiny child nearly hidden beneath it, I yelp “Ndefwaya!” (I want) and hurry out to purchase a few bunches of Chinese cabbage. In fact, a couple of my neighbor kids, astute budding businesswomen with a keen eye for identifying a steady revenue stream, now stop by my house several times per week to ask if I want umusalu. I give them a few kwacha and five minutes later they reappear on my doorstep with fresh produce in hand, tomatoes or rape or kalembula (sweet potato leaves) picked directly from their gardens. 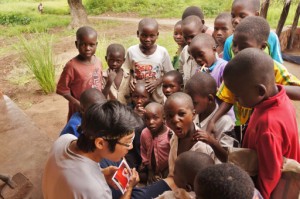